So to mark the start of December, I selected my favourite festive films, those that it wouldn’t feel quite the same without. Following on from that, it also occurred to me how many of my favourite television shows have featured some lovely episodes set at Christmas. This certainly seems to be something US shows do far more than UK ones (well except soaps) and although they can be overly sugary, there are some which are perfect entertainment for this time of year.

So, here are my favourite ten Christmas episodes of some of the television shows I return to again and again. 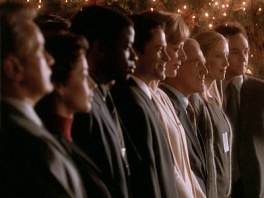 This series one episode remains one of my favourites of the whole series (you can read my full list here) and it’s certainly, for me, the best festive episode of The West Wing as well. There is the comedy of President Bartlett wanting to go Christmas shopping, the sweet scenes between Josh and Donna as she hints at gifts and then receives one from him that is an early demonstration of just how much they care for each other. Then there is Toby, who becomes determined to honour a deceased veteran who received his donated winter coat. It’s writing of the finest kind and full of all the elements Christmas should be. 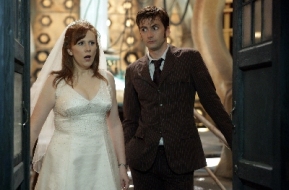 The Doctor Who Christmas Special is now a staple of Christmas Day television and although more recent ones have been lacking for me, there are earlier ones that I return to again and again no matter the time of year. Above all the others, my favourite is The Runaway Bride, in which we first meet Donna Noble and a wonderfully comedic partnership is born, although back then I never expected she’d be back! It’s a bonkers story but this is Doctor Who after all, but more than that the acting of David Tennant and Catherine Tate is superb as their chemistry is so clear. Also, it’s more than a comedic hour, as David so beautifully conveys the Doctor’s very immediate grief at losing Rose. Whether it’s his heartbroken look at watching a blonde woman dance and the truly sad ending as he is finally able to say that her name was Rose, as he chokes back a sob. It’ll take a lot for a TARDIS Christmas to beat this for me.

I accept that not all of this Sherlock episode is set at Christmas, with the story spanning a far greater period of time. However some of the most memorable moments for me are the Christmas scenes and as a result I always think of it as a Christmas episode. As my favourite Sherlock story to date, there is so much I could say about it (maybe that’s for another post!), but the writing is Steven Moffat at his finest, weaving an intricate plot that ultimately all makes sense and reaches a satisfying end. We also get to see 221b at Christmas and how hurtful Sherlock can be when showing off. Louise Brealey is wonderful as Molly in the scene in which she comes for Christmas drinks with her gifts. It’s also a brilliant moment as we see something unheard of – Sherlock genuinely sorry for hurting someone. I do still wonder what her gift was!

Another festive trip to the White House, although there is little cheer here, as we see just how dark a place Josh is in following the Rosslyn shooting. It’s a phenomenal performance by Bradley Whitford (which earned him an Emmy) as Josh is forced to admit how much his near fatal experience is continuing to affect him. It also contains one of my favourite scenes from any television series, as Leo recounts the story of the man in the hole whose friend comes to his aid. If anything emphasises what friendship should be about, then this is it. 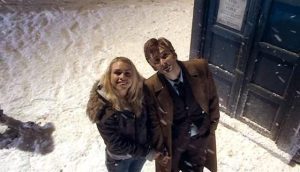 It’s incredible to think now how much of a novelty and possible risk for BBC bosses giving Doctor Who a Christmas special was and Christmas Day 2005 saw not only the start of a tradition, but also the proper introduction of David Tennant as the Tenth Doctor. I still think Russell T Davies is better at capturing the balance of fun, emotion and action for a Christmas episode and this was a brilliant start. By having the Doctor unconscious for most of the story, we see the events from Rose’s perspective and see how she has grown over series one to be a strong force in her own right and it’s only when there is no hope left that the Doctor can return to save the day – and in his pyjamas too! The moment Tennant appears in the TARDIS doorway, confident, cocky and full of joyous exuberance is a highlight of New Who and I knew he’d be brilliant. Not only is this a fun family story for Christmas, but it also manages to move the Doctor and Rose’s relationship forward for a new series. 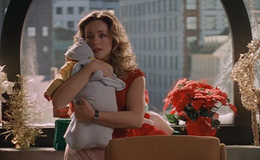 Ally McBeal could always be relied upon to honour the festive season, but series three’s Blue Christmas will always be the highlight for me. The usually carefree Elaine discovers a baby in a manger and falls in love, determined to keep him. Seeing her interaction with the baby is delightful and helps us to see a different side of her. Then there is the usual shenanigans in the bar, this time seeing Ally don her Santa outfit to sing a sexy Santa Baby to a stunned Richard, Billy and co! For more nostalgia about Ally McBeal, you can read my favourite episodes here.

Probably not a series you’d expect to do a festive story, this episode of Chris Carter’s brilliant show (I’ve already selected my favourite episodes of it here) is a fun addition to this list. Fox Mulder can think of nothing more festive than dragging his partner to a haunted house in the middle of nowhere, at which pairs of lovers are rumoured to have killed themselves over the years, following the death of the original occupants of the house centuries before. What follows is a gothic, yet darkly fun story, which sees the two ghosts (played by the brilliant duo of Edward Asner and Lily Tomlin) have their annual fun, trying to convince a couple to kill each other. David Duchovny revels is playing this more crazed side of Mulder and Gillian Anderson is fantastic as Scully becomes genuinely frightened of her partner. Fun and not your usual festive television, I still love this one.

Christmas 2001 was always going to be difficult following the recent terrorist attacks and Ally McBeal’s festive offering that year managed to do its part to honour the sacrifices made in reality through the story of a town banning Christmas due to a recent accident resulting in a number of deaths in the community, including its firemen. John Cage’s speech about the need to share the love of Christmas this year clearly had a deeper meaning not lost on its audience. The episode also saw the return of Josh Groban (whose beautiful voice I only discovered through Ally McBeal) and I never fail to be moved by the final scenes as his character sings To Where You Are in church in memory of his lost mother.

I wasn’t a regular watcher of The Office at the time but even I remember sitting down to watch its Christmas finale. Yes David Brent is his amusing and entertaining self, but the heart of this story is whether Tim (Martin Freemen) will finally get the girl of his dreams Dawn. After so much speculation, I started to think maybe a happy ending wasn’t to be, but the lovely scene in which she opens his heartfelt gift in the taxi and then returns to the party to kiss him is one of the most heartwarming moments of television I’ve seen. We’d all love to experience a moment like this in our lives (go on, you know you would)!

It may have only lasted one series, but I grew quite fond of Aaron Sorkin’s post West Wing series and although some episodes were a bit nuts, The Christmas Show is one of the highlights for me. Matthew Perry’s Matt Albie is determined to pull off a festive spectacular, despite the efforts of his writing staff to debunk all things Christmas, while Bradley Whitford’s Danny Tripp fights to deny his growing feelings for Jordan. The scene in which he finally declares he is falling for her is perfect for his character, as he tells her he is coming for her. It shouldn’t be romantic but for these two it just works. There is also the lovely tribute to the people of New Orleans, following the devastation of Hurricane Katrina, as the musicians of that city take to Studio 60’s stage to play O Holy Night. It’s not a conventional festive episode, but I still find myself smiling by the end of it.

There are others I could have selected, including festive offerings from E.R, Brothers & Sisters, more from Ally McBeal (special mention to series 2’s Making Spirits Bright), Doctor Who (The Snowmen is pretty good) and The West Wing (particularly Holy Night and Impact Winter).

Are any of your favourites included? Feel free to share in the comments.

One thought on “My Top Television Christmas episodes”

I have been watching

Bringing you independent, honest, experienced reviews of current theatre shows. We believe theatre is something truly magical and can be enjoyed by everyone.

Theatre, arts and events in London

Talking about all my favourite things - Theatre, TV, Film & Books!

The following podcast is based on actual X-Files cases." Email: XFilesTruth@live.com

A semi-biased commentary on British and American politics, culture and current affairs

Geeks Shall Inherit the Earth